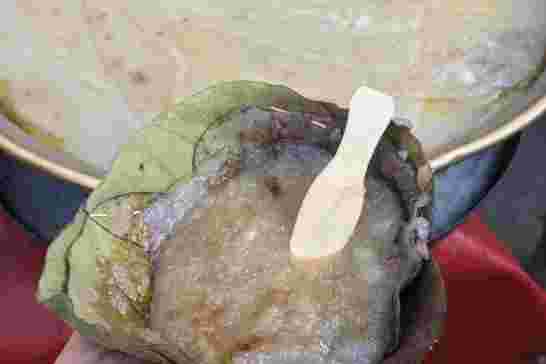 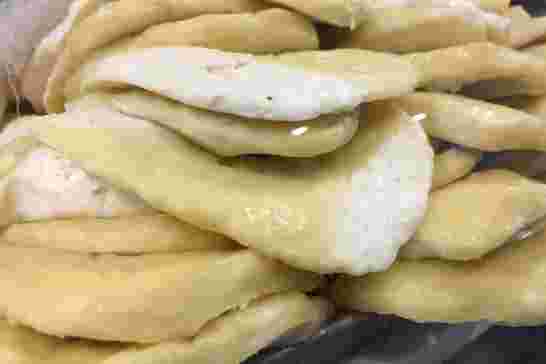 Predominantly inherited by the Dogra people, it is famous for the beautiful paintings done by the clan. Jammu has certain remote, very green and very fresh locations to breathe in which not a lot of people know about! Similarly, there are also amazing food items residing in small shops in the musty lanes of Jammu yet to be discovered by most of the travellers.

Jammu, located in the northern part of India boasts of a rich architectural heritage with intricately carved elephant-like palaces and forts.

The city is famous for the beautiful paintings done by the Dogra clan and it also has certain remote, very green and very fresh locations to breathe in which a lot of people doesn't know about.

Simultaneously, there is a wide range of amazing food available in small shops hidden in the musty lanes of the city.

Halwa at Jugal Kishore Halwa Wale- Halwa is a soft and granular pudding made of semolina and clarified butter. The ingredients used by the owner are very simple. Perhaps, the warm, melting and the sweet taste lies in the hours dedicated to cooking it. You’ll get a scoop of it in leaf bowls. It is similar to the way it is served in some temples.

Halwa reminds us of our grandmothers because they are obsessed with feeding ‘ghee’ loaded halwa to their grandchildren to energize them! This one is similar to the get prepared for the entire day.

Time- It is available from 5:30 am- 8:30 am. It is so popular among the people that it disappears within three hours!

Poori Chhole at Chajju Di Hatti- You know your taste buds are satisfied when you get something spicy to hog on!

These are pooris (round like rotis) which are fried in hot oil till they become slightly red and crispy. It is fun to crack the crispy boils on them! They are served with very spicy Chhole topped with crescent shaped onions and a piece of pickle. It makes the flavour even more enhanced because it becomes more spicy and sharp.

You could ask the owner to drop a spoon of curd in it to moderate the flavour. Still, it is going to taste good!

(Going to grab their Chhole Bhature on the next visit because our mouths are watering already!)

Toast and Tea at Mool Raj Tea Stall- Do you remember travelling in mountains for long hours and then stopping at a small ‘Chai Ki Tapri’ to slurp some steamy refreshing tea with omelettes and bread? This is a one stop shop for every traveller like you.

It is a tiny narrow shop celebrating little moments of happiness. Very wholesome in its own atmosphere, serving food from the heart!

Kachalu at Girdhari Kachalu Wale- It is a ‘Chaat’ made from cocoyam. Indians would resent calling it anything but Kachalu because “it is what it is”!

They cut the cocoyam into cubes and then add some tamarind chutney, green chilli chutney, some tangy spices like ‘amchur powder’ etc. They stir it all very well before serving. It has a balanced flavour of both sweet and spicy. You can also try Kachalu which has red chilli chutney poured over it.

They have two more very interesting things, one is a tamarind chaat kind of a dish. It is waterlogged and is sprinkled with some black salt. When we eat something very sour, we tend to close our one eye, it is exactly at that level, it hits differently. It has a very sour-sweet taste.

Then there’s a more solidified kind of a paste made from the seeds of pomegranate. It is also sprinkled with black salt. It acts like a digestive paste, ‘Churna’ basically!

Banta at Dhanji Ji Hatti- Banta means a marble ball. This is an aerated drink, has lemon, soda, water, black salt and some other spices in it. It is very refreshing and is served in a glass bottle which is sealed with a marble ball. Thus, the name Banta.

Even one sip of this ‘Banta’ makes current and zest travel through one’s body! And the mind will instantly be at mint level peace.

Katlambe at Jaliyan Di Hatti- Kathlamba is a layered, flaky sweet. It is round in shape and very crispy from the outside. The interior of it has a filling of ‘Khoya’. The combination of the texture and the ingredients is perfect!

There’s also salty Kathlamba. This one’s super crisp and flaky. It is like a closely knit coil. A cup of tea is a good companion snack with it. You can also try their ‘chocolate ki barfi’ and ‘Sung’. Sung is sweetened roasted wheat flour mixed with lots of dry fruits.

Fun Fact- This shop is 125 years old. The person who started it, could not speak, so, they kept the name of the shop, Jaliyan Di Hatti.

Veg Thali at Nave Shehar Da Dhaba- Ever been to an Indian village? This shop is going to give you the same raw vibe! Everyday is a fresh menu for them. They don’t cook food with today’s equipment like pressure cookers and all.

They believe that the cooking style and the utensil the food is being cooked in plays a major role in how the food would taste! Here, there’s a huge clay stove setup, tandoor setup, there are pots made from seven types of infused metals and everything is cooked on charcoal pieces tasting utterly delicious.

It is served simply on steel plates, tastes like ‘Ghar Ka Khana’ (home cooked food) and what better could you have asked for! It is a home away from home.

Indians have their heart and soul in ‘Dhabas’ because no five star restaurant could serve what they do!

Rajma Kulcha at Shri Banwari- Rajma Kulcha is a new combination for a lot of people. Rajma means beans. They make a spicy sabji (curry) of it and kulcha is a bun.

There are some chopped onions and a big piece of paneer or cottage cheese served with it. The taste is mildly spicy and it tastes heavenly! With two plates gulped down, you will feel absolutely full.

Tujh at Billu da Dhaba- For all the meat lovers out there, this shop is a treat! It serves ‘Unda’ (top-notch) level non-vegetarian dishes.

You could try Tujh which is meat marinated with spices and chutney. It is a barbecued snack.

There’s also Putra Kaleji to try. It is a mix of chicken and mutton pieces fried on a tawa (pan). It is then topped with long strands of ginger and coriander. ‘Mmmmmm’ is the only chant you’ll know after trying it! Definitely perfectly blended and cooked.

Sweets and Kalari Kulcha at Pahlawan- Jammu has its own variety of ripened cheese. They make a tikki (cutlet) out of it, spice it up and put it between a sliced bun. Kalari is as stretchy and molten as mozzarella cheese. It looks like a burger but tastes way better than that!

There are also sweets like Anjeer Ki Barfi (made from fig), Nutty Barfi, Dry Fruit Ladoo, Besan Ki Barfi etc. With everything of a very high quality, this is the most popular shop of Jammu.

History- The owner of this shop used to live in Lahore, Pakistan till 1920s after which he came to Jammu, India. He started his shop in 1934 and has been running phenomenally ever since!

Kalari Kulcha at Ramesh Kachalu- After having tried Kalari Kulcha at three different places, we conclude that here it is the best. The cheese between the buns are pan fried and served with chopped onions, tangy mango chutney and coriander chutney.

The cheese is very stretchy, it just doesn't tear apart. “The beauty lies in the eyes of the beholder” (Wink to all the cheese lovers).

Information- Kalari is a dense, ripened cheese made from buffalo milk. The solid part is packed and sundried so that the cheese loses its moisture content.

Jammu is underrated when it comes to food especially Kalari cheese which deserves a worldwide recognition. The fact that it is barely known outside Jammu is what we want to change. Mostly the places we went to were either in the bylanes or were slightly at the periphery. It was fun cracking the labyrinth and eating the finger licking food.