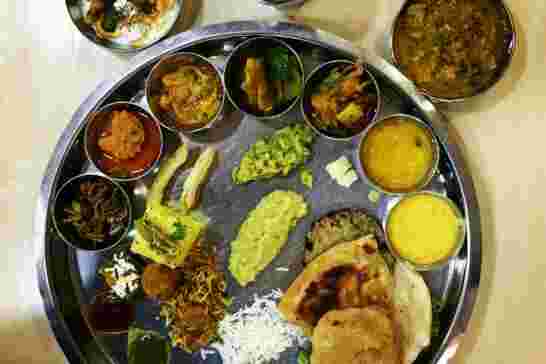 Jodhpur is a braid of an experience, it overlaps and adds and makes up the most memorable and robust trips one can ever ask for! Good food definitely does play a major role in this magical old fort city! Let’s take you through!

On the verge of envying people from Jodhpur because they get such good food, anyway..

Gypsy Restaurant- We ordered ourselves a Standard Thali which was as heavily loaded as a gun and instantly triggered our hunger pangs! If the food sitting before you is a mouthwatering diversity, how possibly can you control yourself!

The plate was a blend of Rajasthani and Gujarati love. It had a few salads, a few chutneys, a good number of currys put in those small steel bowls, fried and non-fried breads, dal bati, paapad, boiled rice, a ladoo and a barfi for dessert and buttermilk to drink. Wait, actually there’s more (AROUND 30) but it's best if you have a look at it yourself, especially the serving part because it is like a treat to watch! We’ll link the video below for you :)

Not in every but in most of the dishes, chickpea flour has been used. Overall, the plate was very rich and each of the things that constituted it were excellent. No exaggeration.

Bhati Tea Stall- From North to South and from East to West, tea is something which is of a prior importance. The tea was a simple preparation of milk, tea leaves, sugar and water. The process was interesting to watch because in one cauldron cow milk was boiling constantly and in the other one, water and tea leaves were simmering together to extract the best possible flavour. It was then poured in a copper jug through which it was shaped in those typical ‘tapri vale glasses’ which have an inverted umbrella look. Hearing the clinking of the glasses while slurping tea from your own pyaali (cup) is the pure definition of tranquility.

Surya Namkeen- Mirchi Vadas are the ‘RAJINIKANTH’ of Jodhpur and this place is a popular outlet to try them! Mirchi meaning chilli is stuffed with a mash of potatoes and onions. And, then it is coated with chickpea flour (besan) and deep fried.

Despite mirchi being the main ingredient, it is kept low on spices and anyone with not a flair for spicy stuff can boast of pushing down a fried chilli down the oesophagus!

Note- Rajinikanth is a popular South Indian movie star. He has a super mad following there! People even worship him.

Al Baik- Chicken Silly is a good non-vegetarian grab here. It is not exactly Rajasthani but people of this place like it.

Chicken Silly is basically a boneless marinated chicken. It has a dust of spices in it, coating of bread crumbs, semolina and egg batter. After deep frying, it is served with a sprinkled masala and a few diced onions.

Jammu and Kashmir Hotel- The Kashmiri chicken we hogged here had nothing to do with Kashmir’s authenticity in making the dish, they just named it because…. We don’t actually know.

It was chicken fried and tossed in Keema Mutton gravy. It has boiled eggs in it and a double fried egg on the top like a flipped hat. It is garnished with freshly chopped coriander and is served with cut lemons and chopped onions. Since the gravy was of Mutton it also had its liver pieces in it. With a baked crisp Khameeri Roti (flatbread), it was a non vegetarian relief to have!

Check out our Part 1 as well and watch the video linked below for a glimpse of all these heavenly dishes!