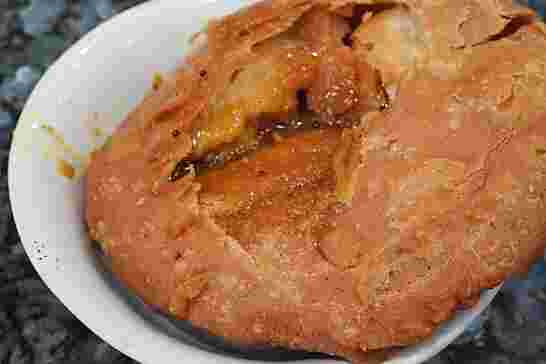 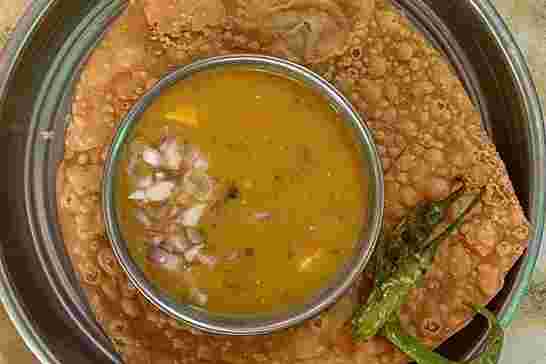 Situated along the bank of river Chambal in Rajasthan, Kota is a growing city widely known for its industries and for being the coaching hub of India because of the huge concentration of engineering and medical coaching institutes. Let's take you through its vibrant street food scenes.

Nayapura Circle Established in the year 1958 it is undoubtedly the most popular namkeen shop in the city where customers come from far and near. We tried a few of their wide range of sev and nylon khaman. Their freshness and well balanced flavours came through really well. Nylon khaman was served with kaith ki chutney

Locals swear by the fresh samosa and kachoris sold by Lalchand Agarwal Samose Wale. Interestingly they serve it in a porcelain bowl along with chutney.

This place is reportedly over 100 years old as it was established in 1902. We tried some kadke which is a slightly thicker version of sev and water chestnut burfi which is a luscious fudge like sweet made of water chestnut flour, ghee and sugar. The sev and other savouvy snacks are prepared in flaxseed oil.

Sharda Mishtan Bhandar is famous for ghewar which is available round the year. Ghewar is a honeycomb shaped deep fried sweet that has a unique crunchy texture. They have a wide range of ghewar. We tried the dried one with mawa and to our surprise it was delightful.

For the past 62 years they have been serving jalebi with milk and it is a favourite of many of the locals. They crush the jalebi, add milk to it and serve the whole thing in a steel tumbler. It is hot, crunchy and milky.

It is another famous name for kachori and namkeen. The genial owner sweetly asks his customers how many kachoris they would want to have in one go. Their lentil stuffed kachori were Milder than Ratan's

It is the place where you can get petha which is a popular sweet from Agra. The petha workshop in the shop doles out fresh batches of this sweet daily. We loved the rose flavoured crunchy shahi petha that had just been prepared minutes ago.

The innumerable kachori shops in Kota are a testimony to its stellar popularity. Another prominent name in this sphere is Shyam Ji Kachoriwale. Unlike others here the kachoris are served with chutney and curd.

It is a 70 plus years old eatery whose dal pakwaan has a loyal fan base. So we had to try it during our visit. The dal was creamy and was mildly spiced while the papdi was crisp and perfectly spiced. We also liked their mawa mishri which is a sweet very similar to kalakand.

Their big sized pyaz kachori is super famous in the whole city. The out part is crisp and flaky while the inner potato, onion and spices based stuffing is slightly tangy and zesty. It goes really well with sweet chutney.

For chai craving we dropped at Hari Om chai stall which is an absolutely old tea stall that seems like a slice from the past. This unassuming place slows you down and transports you back in time.

A simple looking but busy chai and coffee stall run by Sonu ji who mostly caters to with the market people and office workers in the locality.