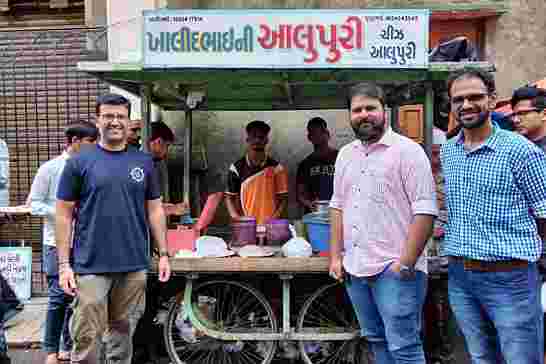 Rander is an old city established around beautiful mosques and ancient Jain temples. It not only mirrors religious peace but also the acceptance of another culture which is Burmese (People from Burma, Myanmar).

Rander is an old city established around beautiful mosques and ancient Jain temples. It not only mirrors religious peace but also the acceptance of another culture which is Burmese (People from Burma, Myanmar).

With so many cultures, tributing to Surat’s existence, it has given rise to a plethora of dishes of its own, also known as Surati food.

Let's explore the best of the Surati food world!

Chai at Golden Tea Point- The founder of Delhi Food Walks said, “It is the best chai I’ve ever had!”. This is enough of a validation for a person to go out and try this. This tea doesn’t have water in it. Its key ingredients are milk, sugar, mint leaves, lemon grass and ground ginger.

It is amazing to see the consistency of this tea, it is just adequately thick!

When you sip it, you will feel like all the flavours consuming you. It will be a top notch refreshing experience.

Khawsa at Lijjat Khawsa Centre- It is one of a loaded spicy plate! Some noodle strands are topped with onion, coriander, chicken balls, chilly sauce and crispy fried crackers. Further, a ladle full with peanut broth is poured over it which reaches every corner of the plate. It looks like a mountain surrounded by the peanut sea!

*Rander is predominantly a Muslim Region. A lot of traders who went to Burma for business, got to India a lot of Burmese dishes. Since fusion is so synonymous with Surat, this Khavsa was given the same twist.

Aloo Puri at Khalid Aloo Puri Wala- It is a bite sized snack. There is a round flat cracker at the base, topped with ‘chhole and aloo ki sabji’, wine coloured kokum chutney, coriander chutney and onions. All in all, it is a blend of crackers, garam masalas and tanginess. It's something you would make at home because you’ll get a solid craving for it!

There are 10 of these in a plate, but you won’t get full with them. You’ll have to go for another one!

Locho at Shriji Locho- Now, this is a typical Gujarati breakfast! It is made from gram flour and is steamed. It has a slimy consistency and is served in irregular pieces. It is like a savoury halwa but it is not really that granular.

Here, one can choose between melted butter and peanut oil to be poured over it. Additionally, there is crispy ‘Sev’, chutney and chopped onions to go with it. For health conscious people, it is a very healthy breakfast.

*Locho is a ‘happy accident’. When Suratis were trying to make Khaman, this dish came up!

Sev Khamni at Madhi Ni Khamni- Sev Khamani at this shop is super delicious because the way it is made here, it is made nowhere else! It is made up of chana dal and resembles a ‘Khichadi’. Very strong flavour of garlic plays in the background. It is tampered with Mustard seeds and is served with sev, chutney and fried green chillies (the big ones!).

Also, it strikes the right balance between tanginess and sweet.

*A place 55 kilometres away from Surat named Madni (a village) was where Sev Khamani was invented. Thus, the name of the shop.

Surti Pattice at Madhi Ni Khamni- These are basically deep fried balls. The outer covering is of mashed potatoes and the inside has a weirdly tasty combination of mawa and spices. To crunch upon, it also has dry fruits in it. You will also be able to feel a hint of coconut and fennel in it. This is also served with a chutney.

You can always keep a box full of Surti Pattice at home. It is an all day crumbly snack.

Khandvi at Madhi Ni Khamni- Khandvi is a thin layer of rolled besan flour. It looks like a rolled carpet, except the texture of it is absolutely silky and smooth. It also has a very shiny surface. Mustard seeds and curry leaves are sprinkled over it. Best part is, this is also steamed!

Snacks like Dhokla, Khaman and Khandvi are a must try in Gujarat.