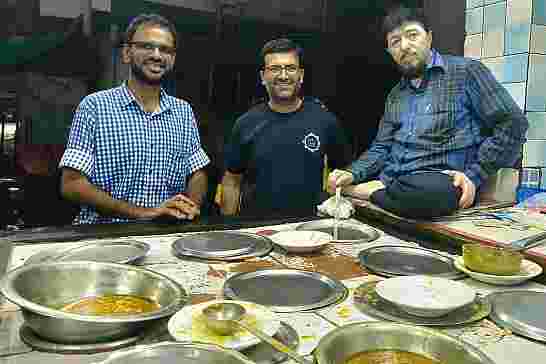 Surat has Hindus, Muslims, Sikhs, Parsis, Christians, etcetera but today, they are homogeneously called as ‘Suratis’. Cuisine is always one of the most impacted areas of strong reflections like these and Surat is no less!

There is a confluence of culture waves coming from different directions. And that one returning wave which has taken with it, the elements of every other wave present at the confluence is Surat for you! It has sustained these communities and cultures ever since!

Surat has Hindus, Muslims, Sikhs, Parsis, Christians, etcetera but today, they are homogeneously called as ‘Suratis’. Cuisine is always one of the most impacted areas of strong reflections like these and Surat is no less!

There’s a popular saying, “Surat Nu Jaman Ane Kashi Nu Maran” which means eat in Surat and die in Kashi (Banaras) for the ultimate experience of the soul.

Let’s start and get ourselves blessed with Surat’s food guide!

Nalli Nihari at Chandbhai Barahandi- It is an old restaurant sustaining itself at a corner of a cross street. It narrates a beautiful blend of Irani and Surati (people of Surat) cultures with twelve pots being cooked in a charred clay stove set-up for over eight hours at the front of the shop. Even the benches and the walls behind the stove spell the authentic vibe! They serve ‘Khameer’ (risen with yeast) Tandoori Roti to go with Nalli Nihari (slow cooked stew), Paaya (feet) and Zabban (tongue). The meat is so tender and silky that it falls off the bone when you eat it with crunchy rotis. It is a delicious spicy breakfast cooked with a lot of integrity.

Malpua Stall- Walking in the empty streets, a possible next stop could be a Malpua cart. Malpuas are basically deep fried sweet flat breads. Suratis (the people from Surat) like it when it is made up of a thick consistent egg batter. Consider it to be a thin and a textured pancake. It is both crispy and gooey, perhaps the best combination to put in mouth! It will be made fresh in front of you and served in a torn newspaper. Originality does lie in simplicity!

Bun Maska Stall- The highlight of this delicacy is the white homemade butter. So, the bun here is cut into three pieces and then the butter is generously applied on the top and in the middle. It looks like there was an attempt to whitewash the bun. A layer of fresh fruit jam is also lined between the halves to make the sweet and the salty taste furnished. It looks yummy and it tastes yummier!

Chai Ki Tapri- At 4 am in the morning, Old Surat is usually a quiet place to be in. It sleeps in the comfort of its land. Only a very few people can be spotted standing under the sheds being served with fuming glasses of aromatic tea. While you drink your tea, you will vibe with everything around you from the clinking of the glasses to the conversations you are not even a part of! You can breathe Surat with its 4 am tea.

Undhiyu at G. Dada- Undhiyu is at the crest of the Gujarati food. Various vegetables like yam, potatoes, eggplant, etcetera are cooked and spiced up together to produce this ‘sabji’. Sprinkled with loads of coriander, it is served in compartmentalized steel plates with whole wheat puffed ‘puris’ and buttermilk. Undhiyo has a very smoky taste and the peanut oil put in it, just makes the entire dish blossom!

It is also worth trying the ‘jalebi’ of this place. A jalebi looks like a saffron coil sprinkled with chopped pistachios. Apart from the crispiness of this sweet, it has this ‘Kesari’ flavour in it which is to die for! Undhiyu with Buttermilk, ‘puris’ and Jalebi is a complete happy meal.

Information- ‘Sabjis’ are vegetable dishes which are usually eaten with rotis, parathas, naans etcetera. To call it a ‘curry’ would be a shallow term because it tends to generalize the flavour of it all and also undermines the cooking skills and the time invested to make them.

Handvo at G. Dada- Handvo is like a beautiful traditional patty drizzled with sesame seeds and fried curry leaves. While the outer layer is crunchy, the inside of it has a filling of various dals (lentils) churned into a thick paste. It is dipped in plain yogurt and eaten. Due to its protein rich base, it is considered to be a very healthy snack. And ofcourse, it is salty in taste.

Vedmi at G. Dada- A typical Vedmi looks like a triangular taco but its inclination is towards sweet instead of savoury. The filling is well pushed inside between the roti shells. Toor dal mixed with jaggery or with sugar is the main ingredient of this dish. On putting Vedmi in the mouth, the clayey filling melts and the taste of cardamom stays on the tongue.

Fun Tip-It is a sweet best served when slightly hot.

Hajoori’s Walnut and Date Kulfi- This shop is at the centre of a crossroad in Chowk Bazaar. Unlike a lot of other places, Hajoori serves this dessert in a form that resembles the chopped discs of bananas. This kulfi has both, the very nutty flavour of walnuts and the sweetness of dates. It is a must try! On the heathy side, this doesn’t have the usual required quantity of sugar in it, the sugar content in the dates does the work perfectly!

Khakhra Chaat at Jalaraam Dana Chana- This ‘chaat’ will come to you in the form of a fully loaded plate. It has a ‘Khakhra’ at its base which is topped with tomato, coriander and schezwan chutney along with mayonnaise. It is interesting to see the flavours evolve when lemon juice is squeezed over masala peanuts and these thinly chopped onions, tomatoes and garlic. Since it is an Indian street food, it is bound to have some masalas sprinkled over it! Once the strands of cheese cover the drooling dump of ingredients on the khakhra, it starts to look a lot like a pizza. Then is your sign to hog on it!

Information- A ‘Khakhra’ is a thin cracker common in the Gujarati cuisine. It looks like a mustard roti and is made from moth-beans, wheat flour and oil.

Collegian and Kachori Chaat at Jalaraam Dana Chana- This chat is exactly the same as the Khakhra ‘Chaat’. The only differences are, that it is served in a bowl without a Khakra, the quantity is relatively lesser and it does not have cheese and mayonnaise in it. The name, ‘Collegian’ has been given to this ‘Chaat’ because it was especially introduced for the college going children around the area at a cheaper price.

The Kachori ‘Chaat’ is similar to the Collegian ‘Chaat’. The only difference is, it is deprived of peanuts and has three to four ‘Kachoris’ at the base instead of a ‘Khakhra’.

Information- A ‘Chaat’ is a very vibrant and a colourful looking snack, rather it is a set of snacks all mixed together to produce a sweet, salty, tangy, savoury and a spicy taste in totality.

Jeera Soda at Jalaraam Dana Chana- This one’s a carbonated drink, more like a digestive one. After getting done with a packed food tour, one can go with this cumin-flavoured soft drink to put the stuffed stomach at ease.

Information- It is an easily available drink in any part of Surat.

Surat is definitely more than its mammoth appearance in the textile and the diamond industry. It has so many hidden food gems that we are yet to explore! Stay Tuned for the next part of the food tour in the Zampa Region of the city.

Empty your stomachs and get ready to drool!